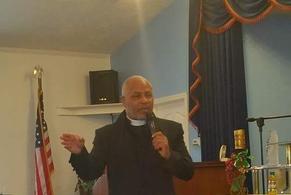 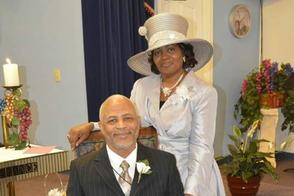 First Lady Evangelist Geri Green is an anointed preacher and teacher of the gospel of Christ. She is a native of Macon, Georgia, born to the union of the late Mr.& Mrs. Albert C. Davis Sr.
Evangelist Green traveled with her husband during his career in the United States Air Force for twenty- two years.

During this time she was saved overseas in Athens, Greece in 1980. She hosted Bishop Archie Buchanan Of Japan, in her home for noonday prayer for the break out of revival. In this noonday prayer Evangelist Green was filled with the Holy Ghost.

She served faithfully there in the Church of God In Christ under the Leadership of Pastor E.L. Woolard and 1st Lady Darnetta Woolard. She is given to much hospitality as she opened her home for many fellowships, and providing a home away from home for many singles and married alike.
In 1985 she was called to the ministry in Mildenhall, England. In England Evangelist Green was a member of the Evangelistic department and served as a revivalist conducting crusades at Air Force bases throughout the United Kingdom.

In 1990 she received her Evangelist licenses in Plattsburgh, New York where the late Bishop Ithiel C. Clemmons presided. There Evangelist Green taught the Wednesday night adult bible study, and God blessed the ministry through the teaching of his word. “To God Be The Glory”. She was afforded the opportunity to preach to over 50 or more inmates on Mothers Day at High Point Prison.
Prior to her husbands retirement from the military they moved to Georgia. They joined Greater Community in Marietta where the late Bishop C.D.Owens served as Pastor. She served faithfully there as a member of the Ministers Wives circle later to become the president. She also served as program/seminar coordinator on the Missionary Board, Altar Worker and Sunday school teacher.

Evangelist Green gives glory to God for her many speaking engagements, paving the way for women in the gospel. God used her in many occasions to be the first female speaker in churches. At a time when some Pastors was not open to women in the ministry. She has been afforded the blessed opportunity to teach in many conferences and seminars.

She is a student of the Word, constantly seeking God for wisdom, knowledge and understanding. Thanking God for her spiritual mother in the Lord, the late Dr. Dorothy Mae Webster Exume.

She is a member of the first graduating class of the C.H.Mason Bible Institute of Central Georgia. She also served as Grand Marshall of the Women’s department of the C.H.Mason District. She has many opportunities to speak as she serves beside her husband. Evangelist Green is happily married to Elder Morgan Green for forty one years. Together they have three daughters, and five grandchildren.
She stands praising God for her many accomplishments and services rendered unto The Lord.  Her motto: “ Stop God if you can, you cannot do it know matter how hard you try.” If God Be For You…who can be against you.


Elder Morgan Green is an anointed preacher of the gospel of Christ. A native of Macon, Georgia, he was born to the union of the late Mr. and Mrs. Charlie Green Sr.
After graduating from Southwest High School in 1971, Elder Green served his country in the United States Air Force for twenty-two years.

During his military career he was saved overseas in Athens, Greece in 1980 and was introduced to the Church of God in Christ there. Elder Green was baptized and filled with the Holy Ghost in Greece during a revival ran by the Bishop Archie Buchanan, Bishop of Japan.

For seven years he served the Lord faithfully by working as a deacon. In 1987 he was called to the ministry in Mildenhall, England. In England, Elder Green was a member of the Evangelistic department an assisted in conducting crusades at Air Force bases throughout the United Kingdom.

Elder Green was ordained in 1991 by the late Bishop Ithiel C. Clemmons in New York City.

After retiring from the military Elder Green moved to Georgia. He and his family joined Greater Community in Marietta, GA where he served as an associate Elder under the late Bishop Chandler D. Owens. He later would start a church, Greater True Vine Church of God in Christ in Norcross, GA in the home of the late Dr. Dorothy Webster Exume. He served faithfully there until the Lord spoke to him to do other wise.

Elder Green is a member of the first graduating class of the C. H. Mason Bible Institute of Central Georgia. Elder Green is a graduate of Mercer University of Atlanta where he earned a Bachelor degree in Organization Leadership.

He is married to his one and only wife of forty one years, Elect Lady Geri Green. Together they have three daughters and five grandchildren.

He Currently serves as the Pastor of Greater True Vine Church of God in Christ in Douglasville, Georgia.